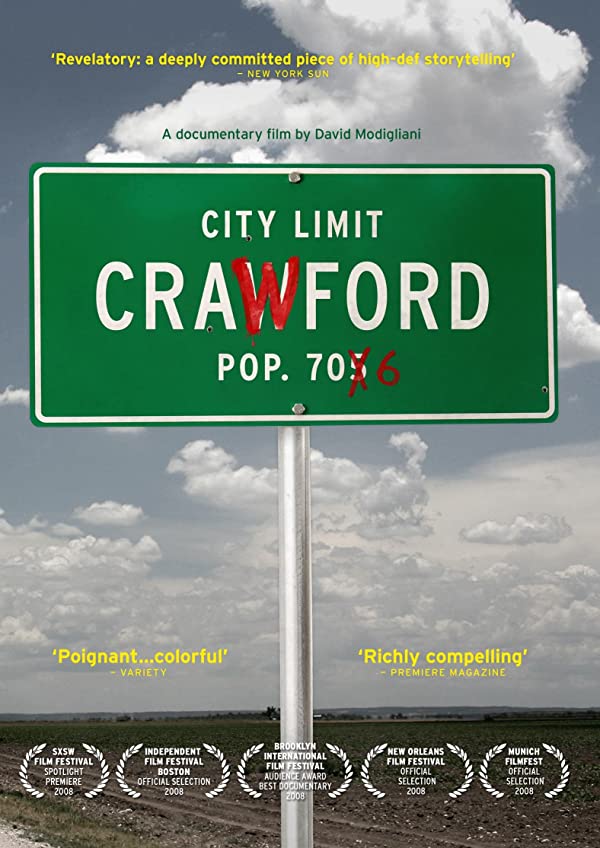 The right mingles with the left, no one is declared a winner…a brilliant job…refreshing to have such a politically charged environment delivered to the viewer with such an even hand. – Film Threat

In 1999, then Governor George W. Bush bought a ranch in the one-stoplight town of Crawford, Texas, calling it “home” just in time to set his sights on the White House. Having burnished Bush’s folksy image, the campaign’s victory thrusts Crawford onto the world stage. An insular community of barely 700 explodes overnight.

While the high school band plays the inauguration and the Baptist pastor declares a miracle, Crawfordites sell souvenirs hand over fist, finding themselves nearly trampled under the heels of the international press corps, patriotic tourists and boomtown opportunists. Then, four and a half years into Bush’s tenure, Cindy Sheehan and her peace movement arrive at the doorstep of the “Western White House.” Crawford takes center stage.

As 20,000 impassioned protesters and counter-protesters battle on Crawford’s tiny streets, the symbol of the “small town” begins to change. Exacerbated tensions place pressure on the community as well as on the liberties Americans take for granted. And after seven years of this political stagecraft, a President’s choices have an even graver human impact. Left to deal with the aftermath, the real people of Crawford are changed forever. This documentary is an often funny, deeply human story told by unforgettable characters. As witness to one man’s decision to intertwine his life with the real small town America, the film ultimately becomes a microcosm of a nation in flux – a unique and poignant reflection on the Bush era.

Stream the full film via iTunes, Amazon or YouTube.